On March 29, 1943, General Walker relinquished command of the Desert Training Theatre and proceeded with the IV Armored Corps Headquarters proceeded to Camp Campbell, considered a step nearer to shipment overseas. Plans for extensive training were put into place, proving to be fruitful later on as the Corps demonstrated an aggressive fighting character that leverage the highest degree of discipline and morale. 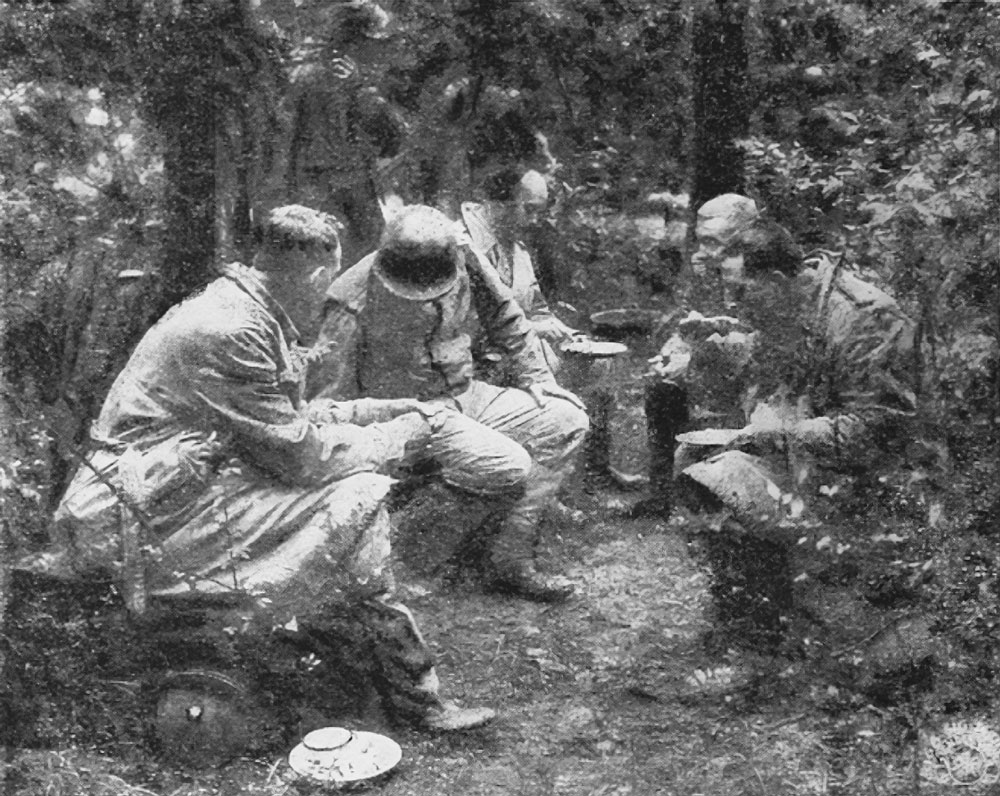 Strategic away trips were conducted to observe other operations overseas, including those in North Africa, to learn of the progress being made in unit training and in infantry, artillery, and tank tactics. General Walker went to the North African Theater of Operations in the spring of 1943 to visit the fighting fronts for first-hand information about the soundness of American training methods, effectiveness of U.S. Army strategy and tactics, and the efficiency of weapons and equipment. 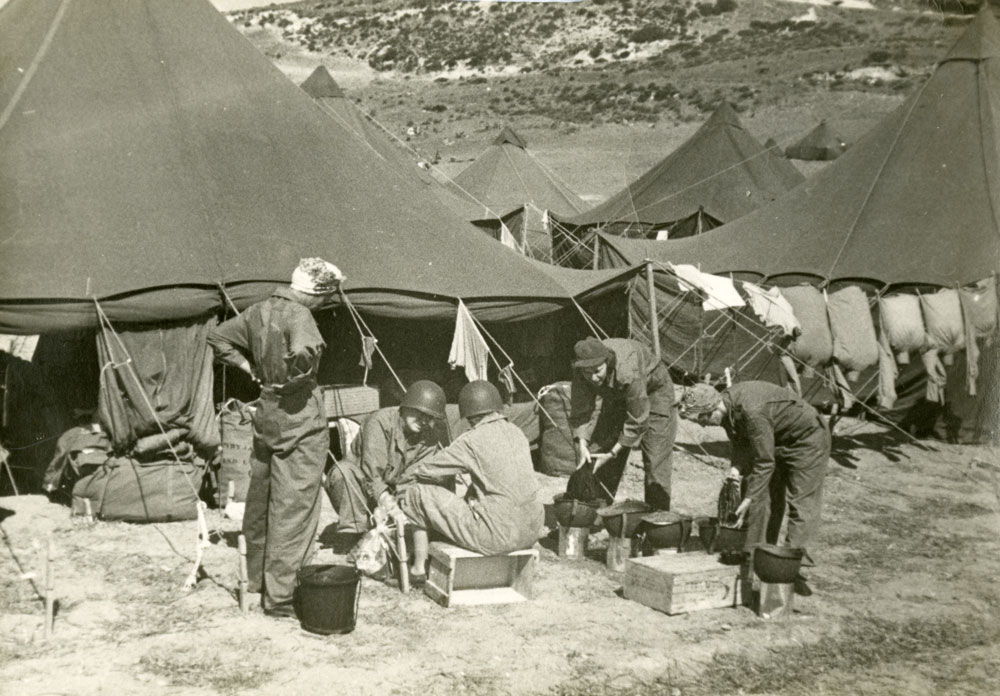 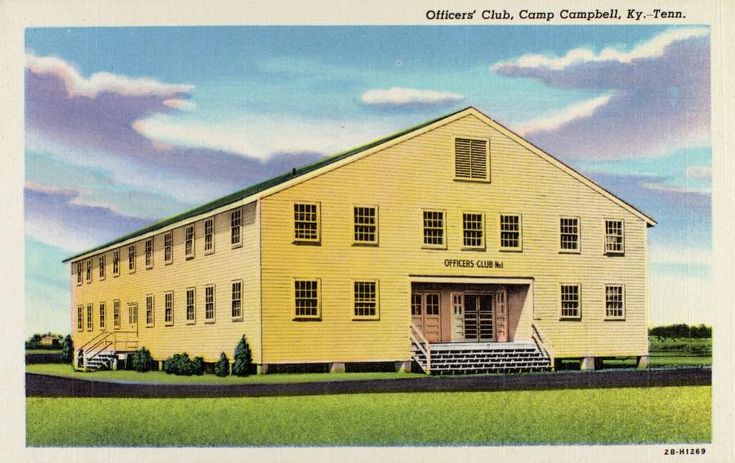 Training continued in Tennessee, continuing to build the morale and cohesiveness of the Corps. The Corps developed a level of excellence using innovative tactics aimed at achieving surprise on the part of the enemy, attacking from the rear and disrupting the lines of enemy communication. And the element of surprise was furthered by dropping paratroopers behind the lines of the enemy at night. 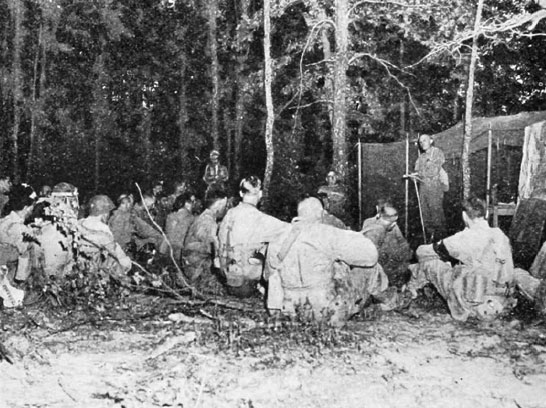 General Collier addresses the Staff Officers of the CC Corps during the Tennessee maneuvers. These manuevers served to complete the Corps Headquarters training program, and the organization received the official approval from the War Department, thus achieving a place on the list of units thoroughly qualified and trained for combat service. 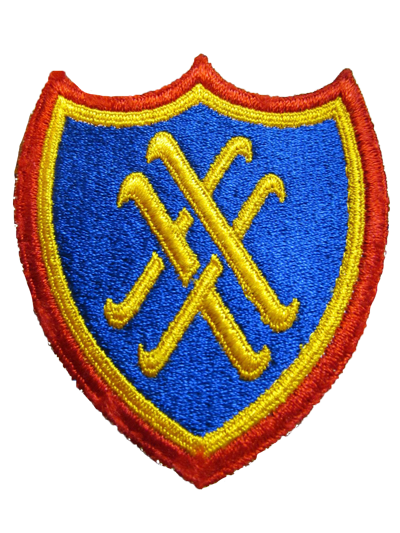 On October 9, 1943, while it was still in the maneuver area, the IV Armored Corps was redesignated the XX Corps United States Army Corps.

“The colors introduced in this insignia were carried over from the Armored Force patch and are those of the main arms comprising the Corps, namely, Infantry, Artillery, and Cavalry; while the crampons represent the gripping and tenacious hold the Corps would display in its missions.” 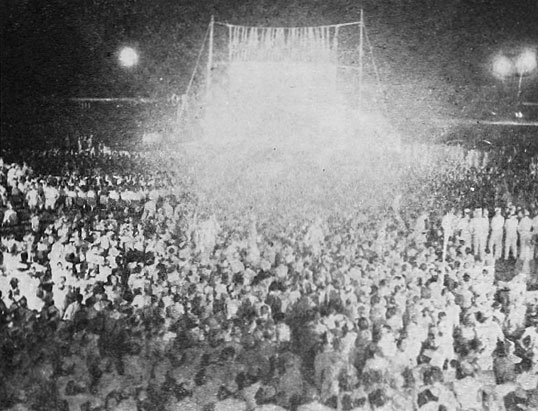 It wasn’t all hard training and discipline in Camp Campbell. On September 2, 1943, the IV Armored Division celebrated its first anniversary of its activation. The main event was the World Premier of the Columbia picture “Sahara,” a desert epic staring Humphrey Bogart, produced in the Desert Theater of Operations.

You may have already noticed, but if you hover over some of the photos, you’ll see a color stylized version of the photo.

I figured that since this celebration was also about the world premier of the movie Sahara, I might as well try out my new colorizing tool. Undoubtedly there will be more. 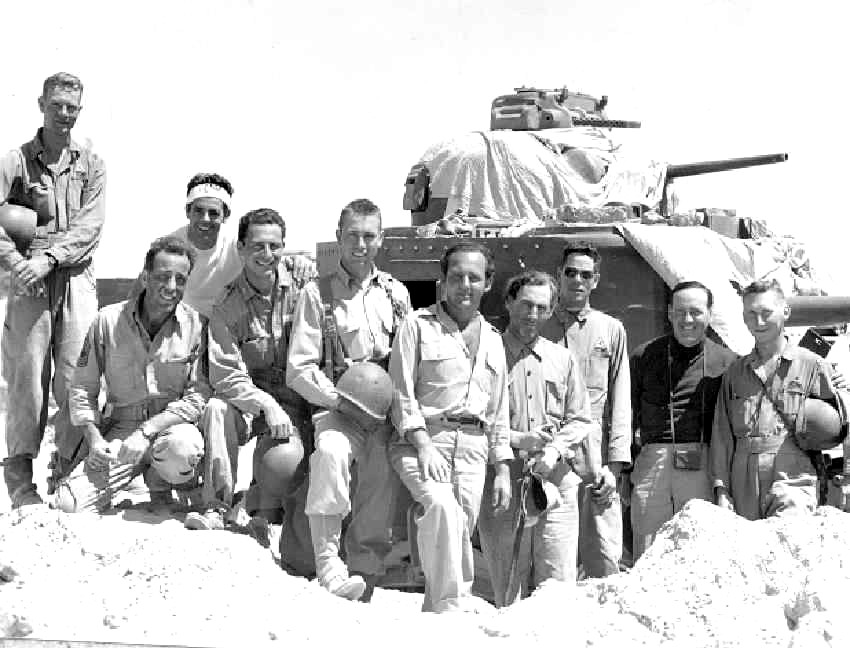 After completing all POM requirements, each man was given the opportunity to settle his private affairs at home. The outfit received alert orders in mid-January and on the night of February 10th the outfit boarded a navy vessel that took them to the 49th Street pier in New York where the Queen Mary was docked. The following morning, the outfit boarded the Queen, no longer luxurious as it had been stripped of her luxurious fittings, furniture, and art objects to provide additional space. Instead, steel cots, arrange in tiers, filled the stateroom and compartments.

On February 12th, 1944 the ship left New York, sidling past the Statue of Liberty, and set her course for Europe.

The days were grey and cold, the ship packed with fighting men who didn’t always weather the zigzagging motions of the ship. Given the large number of troops on board, it was impossible to serve more than two meals a day, adding to the discomfort of the passengers. But the men found a tolerable routine that included spending long periods of time on the promenade to read, have a smoke, or play a few hands of cards. 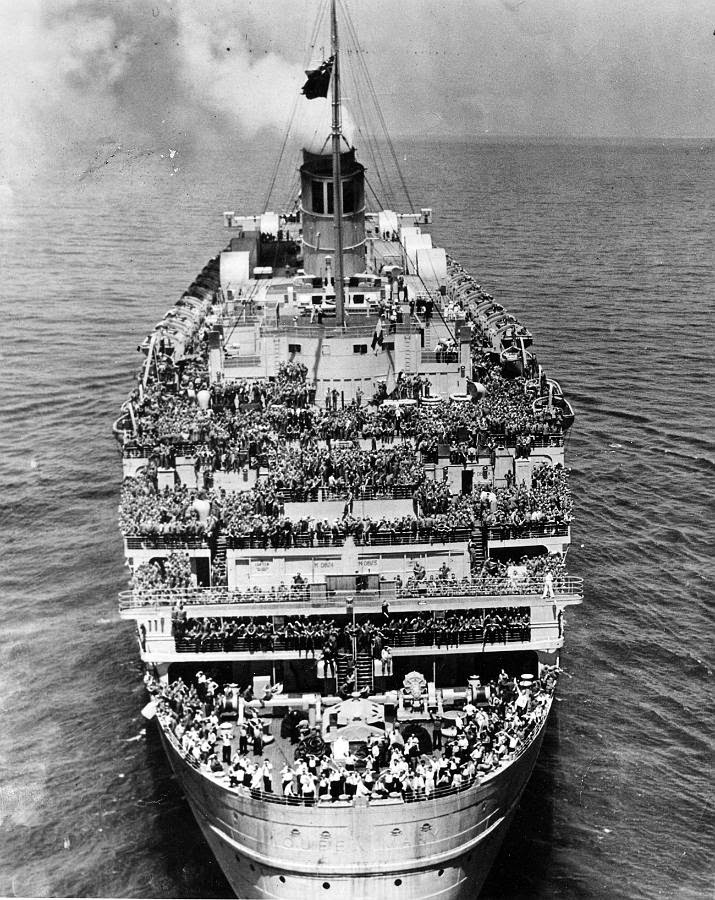 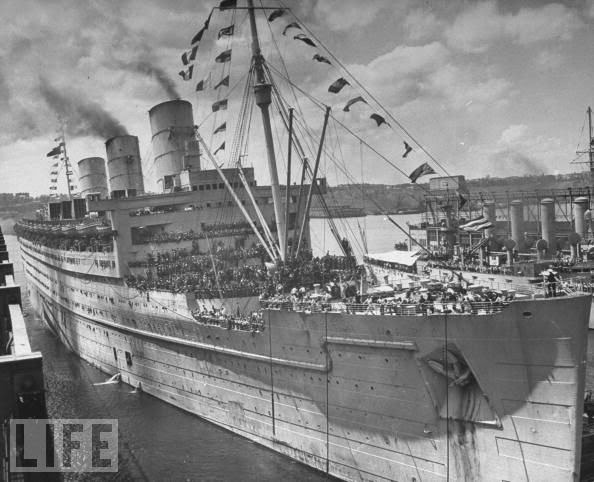 On February 18, 1944, the Queen Mary arrived in the Firth of Clyde near the town of Gourock, Scotland. The crowds there were enthusiastic, waving flags and offering gestures of welcome. British patrol planes flying above dropped low toward the ship’s deck, signaling their enthusiasm by gunning their motors as the circled the crowded ship. 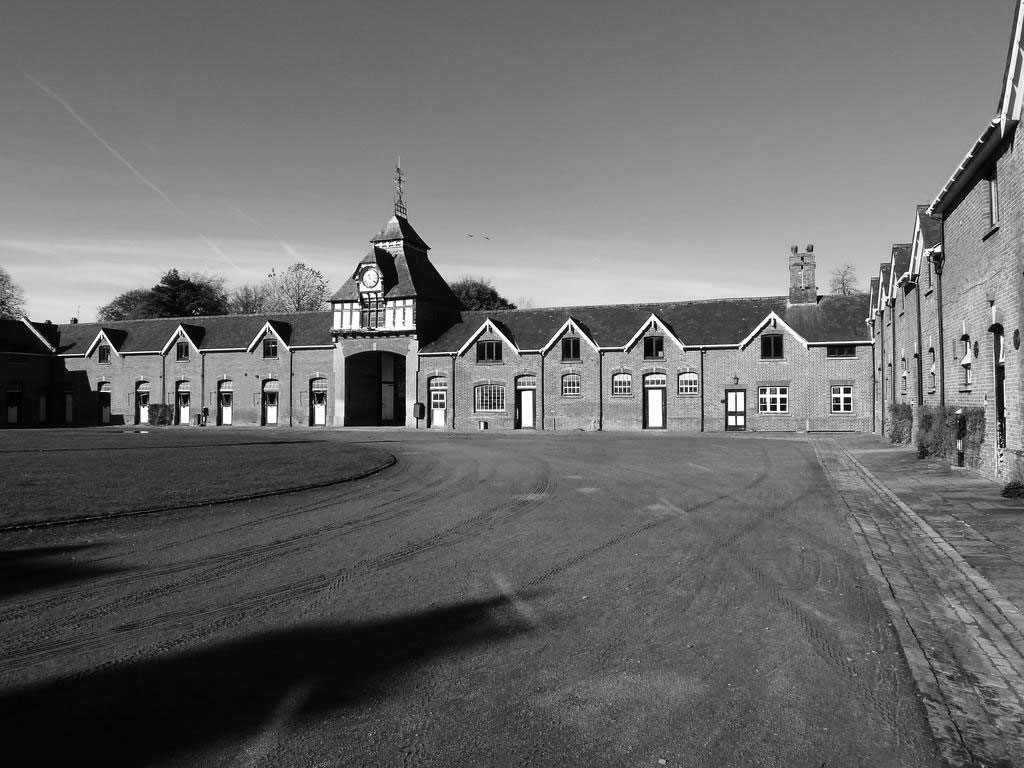 Headquarters XX Corps Artillery debarked on February 18th and landed on the dock at Gourock, Scotland, to the sound bagpipes and the very welcome hot coffee and doughnuts provided by the United States Red Cross. At 1600 that day, XX Corps Artillery entrained, traveling through Glasgow and Edinburgh, then south into England. They arrived the next day at the assigned billeting area in and around Manton House, Marlborough, Wiltshire, England. The officers were billeted at the Aylesbury Arms Hotel and in a number of smaller inns. It would be home to XX Corps Headquarters and Headquarters Battery for the next five months.

Taking in the Local Sites

During non-duty hours, the Corpsmen got acquainted with the local people, studied the architecture and art, and enjoyed the countryside. Site-seeing trips were made to several popular destinations, including Oxford, Bath, and London. 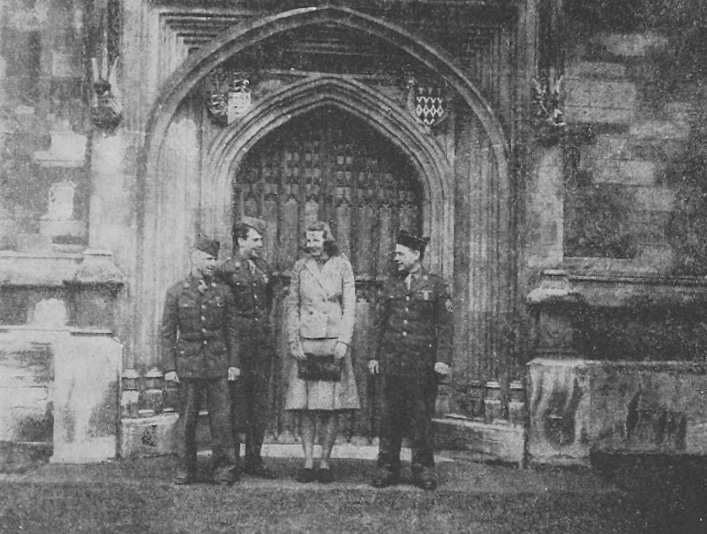 If you have XX Corps stories, please send them to me if you’d like them included on this site, and if you think I might have some photos or information about someone you know, please don’t hesitate to ask.

I’ve already heard from the son of a Captain who served with XX Corps. He has shared some amazing tidbits about his father that will be added to a new section of this site.